For me, writing is never particularly easy; it’s always work. But these months in isolation working on the 4th edition of Day Trips New England have been a welcome distraction from pandemic constraints.

Day Trips New England is by far my best selling book. I like to think that the books is popular because it offers helpful recommendations and inspiration for planning a great trip to New England. But I also suspect that the book does well because it’s cheaper than its competitors.

Day Trips New England was originally published in January of 2012- which means that I spent much of 2011 working on it. Thankfully, rewrites are much quicker. This was a heavy edit- especially as many of the region’s restaurants and shops have gone out of business because of Covid-19. And as usual, I added tons of new restaurants for Boston and Cambridge- because everybody wants to know where to eat right now.

So, what else is new in Day Trips New England? Actually quite a lot.

For this edition the publisher wanted 5 totally new itineraries. For themed trips I went with an “Epic Red Sox Road Trip of Dreams” which takes fans to Boston’s Fenway Park, out to Worcester (to see the inaugural season of the Woo Sox) and on to Portland to see the Double A-affiliate Sea Dogs.

From my talks over the years, I’ve learned that many of my readers are book-ish types. My ” Literary Tour of New England” is for them. The trail begins in Concord, Massachusetts to visit the home of Louisa May Alcott, and Walden Pond, the site of Henry David Thoreau’s experiment in solitude. A picturesque drive out to Western Massachusetts brings the house museums of Emily Dickinson, Edith Wharton and Herman Melville. Drive south to Hartford and it’s an easy “two-fer” to visit the next-door homes of Mark Twain and Harriet Beecher Stowe. Not so well known is that Rudyard Kipling lived in Southern Vermont while writing “The Jungle Book”. You can even book a stay in his home, Naulakha. How cool is that?

Truthfully, I might have had the most fun writing “The New England College Road Trip”. Although none of my four (now grown) children chose to go to university in New England, I have done dozens of college road trips to every corner of the region when my kids were high school juniors and seniors. You’re welcome.

For the state-specific trips I added a South Coastal Rhode Island itinerary from Providence to Westerly. And from Burlington, Vermont, Montreal’s continental allure is less than a 2-hour drive away. (Montreal has always been one of my favorite cities).

So while travel and tourism are at a near standstill for the foreseeable future, close-to-home vacations by car are a safe bet. Lucky for those of us in New England, we have lots of amazing destinations in our own backyard. 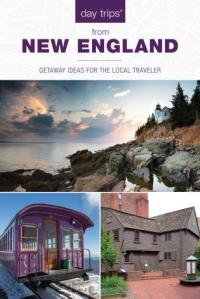